OK, maybe it’s not that scandalous, but if I’d titled the post “Unusual Construction Detail” most of you wouldn’t have bothered to read this.

Anyway, the ‘scandalous’ part is that yesterday I went to tour the Gamble House in Pasadena for the first time ever. Seriously. People who know me and my mania for architectural detail think I’m kidding. It’s always one of those things I’ve meant to do, but because of ‘close-proximity syndrome’ I’ve just never gotten around to it. It was worth the wait.

Yesterday my oldest daughter graduated from the Junior Docent program there and part of their graduation duties was to give their first tour of the house to their parents. So, having my daughter show me around the place was a proud moment. You could say that every inch of the house was designed but that wouldn’t be true. It’s more like every half inch. Photographs do not do it justice.

Due to some nasty weather, the ceremony was held in the basement, a place normally off-limits. I looked around at the brick foundation walls of the deep room, surprised to not only find a full basement but a deep one at that. Being that the Gambles were from Ohio I guess It’s not so surprising. I noticed an unusual tie plate that connected the heavy sill joist to the brick and then realized they were spaced fairly closely together all around the foundation. 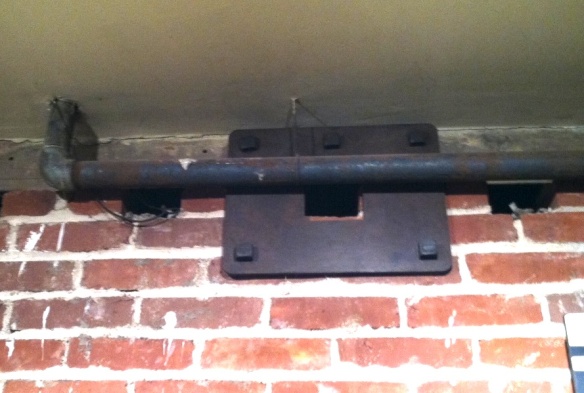 I was assured they were original to the house. Apparently the first question the Gambles put to the architects they interviewed was, “what do you know about earthquakes ?” The 1906 San Francisco earthquake was no doubt fresh in their minds and, being Midwesterners and having no direct experience with quakes, the prospects of even a less damaging quake was terrifying.

The tie plates appear to be about 14″ wide by 12″ tall and are about 3/8″ thick. Each has about a 4″ x 3″ hole punched in the center and is lagged into the brick in two places and the sill joist in three places with what appears to be 3/8″ or 5/16″ bolts. There is a metal spacer between the plate and the joist that is the full width of the plate and is about 1 1/2″ high by 1″ thick. The holes in the plates are aligned with half-brick wide openings in the top of the foundation.

The question in my mind is, were these plates specially designed for the house or were they a readily available item? Considering the Greene’s extreme attention to detail and Henry Greene’s engineering skills, I wouldn’t be surprised that this attention would include parts that few people would ever see. If anyone knows more about it I’d love to hear it. 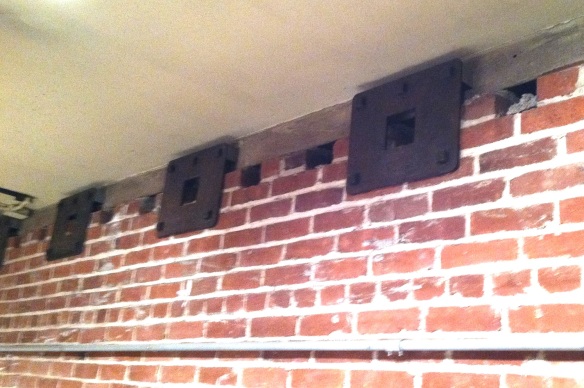