I think of myself as a pretty thoughtful, conscientious  person. Or I did until this week when I realized I had forgotten my wedding anniversary. The only thing that saved me was that my wife had forgotten it too. In our mad dash to keep our careers on track we sometimes let milestones pass us by without noticing them until they’re way back in the rearview mirror of life.

This article, A Short Lesson in Perspective, is by former advertising Art Director Linds Redding. The work conditions he describes are a near mirror image to those in the film and television industry today. The siren song of technology has allowed us to do things much faster and easier than we could have years ago. But that speed and efficiency has come at a big price, and one you sometimes don’t notice right away.

Redding was diagnosed with esophageal cancer several years ago and it took that to make him realize that he was letting his job eat him alive. When he realized what his creative advocation was costing him, he began to ask himself, ‘when is the cost for having a creative career not worth it anymore ?’

Stop what you’re doing. Read this. Is this you? 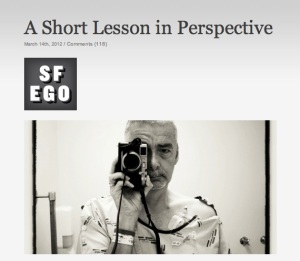 A Short Lesson In Perspective

3 thoughts on “A Short Lesson In Perspective – Mandatory Reading”