At the Los Angeles County Museum Of Art now until April is a special exhibition of artwork and posters from the German Expressionist period of the silent film era, 1919 to the mid 1930’s. Produced in association with  La Cinémathèque Française and the Academy Of Motion Picture Arts And Sciences, the show features over 150 pieces of artwork from classic films of the German UFA studio.

Along with many posters are a large number of original set and costume design drawings which are seen together for the first time here. Most of which have not been on display here before and others only seen as small images in publications.

Of course artwork from the most well-known films are there; The Cabinet Of Dr. Caligari, Metropolis, The Nibelungen, but there are many others from more obscure films as well including Robert Hearlth’s original schematic of the forced perspective backings from Der Letzte Mann which were such a sensation.

One of Ernst Stern’s drawings for Waxworks, which indicates the set design, platforming, camera position and lighting.

A watercolor and charcoal drawing for one of the sets for Dr. Caligari by Walter Röhrig

It was common during this period of German cinema for Art Directors to work in teams of two or three people, dividing the design duties among themselves as matched their individual abilities. A perfect example of this is the work of Otto Hunte and Erich Kettelhut on Fritz Lang’s The Nibelungen. Here is a drawing by Hunte of the dragon by the waterfall.

Gouache painting of the dragon for Die Nibelungen by Otto Hunte.

Being the more technically trained, Kettelhut elaborated on the design by drawing the technical requirements of the dragon to carry out the action called out in the script.

Technical drawing of the Dragon by Erich Kettelhut

Kettelhut carefully described how the giant action prop was to be built and operated both with stage requirements as well as the on-board personnel’s responsibilities.

Enlargement of Kettelhut’s drawing describing how each part of the dragon was to be operated by stagehands.

The size and depth of the recessed path required for the props operators. 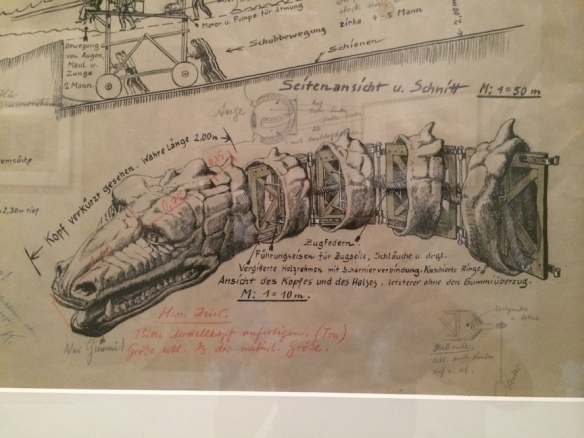 Kettelhut called out the length of the neck as well as the eye detail, tension springs, framework, control cables and hoses required for the creatures fiery breath. He calls out “only rubber!” for the mouth area.

Here is the scene from the film where Siegfried finds and kills the dragon. The effect is quite crude by our modern film standards but must have been thrilling for a public new to such spectacles. Imagine the lot of the half dozen stagehands stuck inside the big, airless prop as it bellows smoke from inside it. Notice the large forest and mountain sets created for the film, truly epic efforts for the time.