A lot of people take shots of sets and wonder how the focal length of their still camera lens compares to cinema lenses. Even if the capture format is 35mm film or a digital camera with a 35mm size sensor, the angles of view are not the same as with a 35mm still camera.

The reason is that the the film runs horizontally through a still camera instead of vertically as through a cinema camera, resulting in a larger frame in the still camera which in turn results in a wider angle of view with a similar focal length lens.

On the chart I’ve drawn a full size outline of each sensor/frame size so that you can see the difference between the two mediums. You can use this chart on any size scale plan and it will give you a very close approximation to what you’ll see with a given lens. If you want to use it on elevations you’ll need to divide the angle by 1.33 to get the vertical angle.

For those of you who use iPhones for stills, you can download a AOV chart for the iPhone below, print it on acetate and compare in to the 35mm lenses.

A lot of times when you’re using your smart phone camera to take a shot of a set or location it would be nice to know what the equivalent view would be with a 35mm cinema / video lens.

I ran the numbers for most Apple devices and came up with the following equivalent focal lengths for both 35mm still cameras (full frame) and Super 35mm size sensors. Remember that although both formats are based on 35mm film stock, the frame for a still camera is a 1.5 aspect ratio with a frame width of about 1.417 inches. A Super 35mm frame is a 1.35 aspect ratio and the frame width is .980 inches.

Why only Apple? Well, the company readily makes their devices lens and sensor data available and it was easy to calculate. In the next post I’ll show you how to measure for your devices’ angle of view if the exact focal length isn’t published.

Please note in the following table the focal lengths for the given device have been rounded up to the nearest whole number so the equivalent lengths given are approximate.

Actually that’s not entirely true. It’s not really a new tool and it wasn’t made specifically for location survey work. The iPhone has become a ubiquitous item on film sets now. The number of apps created specifically for film work is over 50 with others being released monthly.

There have yet to be any released specifically for the Art Department but quite a number of them, including those designed for other occupations, are really useful to have.

Among these are the two apps, Photo Measures and My Measures And Dimensions. Both work very similarly and are great for recording and transmitting measurements of locations or of objects.

Basically they both work by either taking a picture with the phones camera or importing an image from the library. Them, dimensions are added, both linear and angular.  Zooming in to the photo allows for accurate placement of arrows as well as allowing you to delineate small details. Notes can be added as well using a text tool. 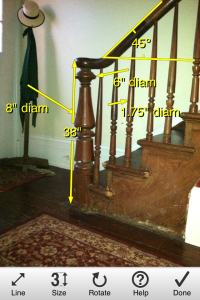 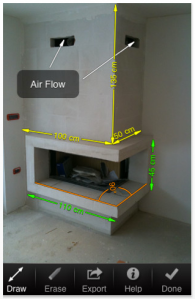 As you can see, both applications are very similar, but one advantage of Photo Measure is, the basic application is free as compared to $2.99 for the basic My Measures. Photo Measures also has an enlargement window that makes it easier to precisely place dimension arrows. Give it a try and see if it’s useful for you. If you don’t own an iPhone, many apps also make versions for the Droid.