“There is a tendency among those accustomed to the large-scale of moulding detail on exterior work in wood or stone to make their mouldings on furniture and interior woodwork too large. The full-size furniture moulding so carefully drawn by Mr. Warne should be of the utmost service not only to furniture designers but to students of architecture and interior decoration.” “This book covers many different types of English furniture; bedsteads, bookcases, bureaus, cabinets, chests, cupboards, chairs and others. This book illustrates cover this book covers molding details on English furniture from about 1574 to 1820 molding is the method adopted by the cabinetmaker to give definition to the lines of his work and the sections of molded detail very very much as one style has succeeded another through the oak, walnut, mahogany and satinwood periods of English furniture the workings of moldings was then so laborious that the craftsman use them with greater restraint and obtained more pleasing effects by their use than is frequently the case today when profusion often eliminates interest.”

E.j. Warne’s book, Furniture Mouldings, is still one of the best resources on 16th to 19th century British furniture. Almost never out of print, copies can be had for as little as $1.

Until you get a print copy, you can download a digital scan of the book below. Scanned from an ex library copy, there are a number of damaged pages but you can get a good idea of the scope of the book.

In February I posted an article about using your hand in photographs as a scale reference but didn’t go into how you extract that information once you have a copy of your photos. Here are three methods, two analog and one digital, that you can use to figure out hard dimensions from objects in photos.

Once you have had some practice, this is the fastest method of the three, even faster that the digital method and you can use them right off a photo from a book or even a smart table screen. If you don’t have a set of equal dividers, also called 10 point dividers, you can buy a new pair for between $250 and $300 from various sites such as this one, or this one . They sometimes show up on Ebay but plan to pay around $75 to $100 for a used set.

In this photo of a 1840’s Greek revival casing, we’ll scale the actual size using the hand in the photo as a reference nomen. 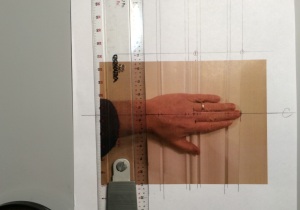 The first thing you’ll want to do is draw lines outlining the sides and edges of the moulding details, then you’ll draw a centerline through your scale, whether it’s a hand or tape measure. Then draw a line parallel to this at the top of the picture crossing the outlines. Now continue the lines perpendicular to this new datum line so that they are parallel which eliminates the perspective/foreshortening effect of the photo. Then mark a known distance on the original centerline, in this case it’s the distance from the tip of the middle finger to the end crease which is 3 3/4″.

Now transfer these two points to the new datum line at the top of the photo. With the dividers, open them along this datum line allowing the distance between each point to equal 1/2″. They can represent any distance you want them to, but 1/2″ works best for this example. This means that 7 1/2 spaces will equal 3 3/4″ scale inches along the new datum.

Once you have these marks set, carefully move down to the bottom of the page and mark the distance at the first and last point. As each space represents 1/2″, the distance over the width of the dividers is a scale 5″ along the nomen line. For accuracy you’ll want to continuously check the spacing of the dividers against this ‘master’ to be sure you haven’t changed the setting. Most dividers are manufactured with fairly ‘tight’ joints but you can easily bump them while you’re working and throw off the setting.

Now we have a scale to measure the spacing between each of the line extensions above the top nomen line. You can mark the distance at the middle point and reduce the spacing of the dividers to equal 1/4″ in scale and so forth. I came up with an 8″ width, which when I checked the casing with an actual measuring tape, found it to be in reality 7 7/8″ to 7 15/16″. Not bad, well within the accuracy of most applications.

This method is not only more accurate than the equal space dividers but is a cheaper method as well, just not as fast at first. I have a set of Mitutoyo digital calipers which run about $180, but you don’t need anything that accurate. You’re going to be dealing with nothing finer than a thou of an inch and even that’s pushing it. A $12 pair like these are more than adequate, in fact this $9 cheap plastic pair are even better as the sharp points on the jaws of the better calipers will rip the crap out of the surface of the page of a book or the emulsion of an enlargement. They’re a lot safer to use when you’re scaling off a computer screen as well! They all have the ability to be set for decimal inches or metric.

The nomen in this photo is a Keson Pocket Rod, a retractable builder’s survey pole, ( don’t know if it comes in a metric version) if you don’t have one, get one right now. You’ll wonder how you got by without it. With a graduated scale in the photo it’s easy to find a correct scale. Turn the calipers on, squeeze the jaws together and zero out the reading. then you just set the jaws between a one foot increment and record the reading. 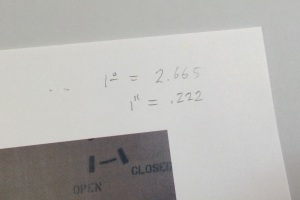 In this example 1 foot equals 2.665 inches. Divide this number by 12 and you come up with .222 inches equaling 1″ in the photo. Record these numbers for reference at the top of the photo. Remember that this equivalent will only be accurate over the whole area of the photo if you have been careful to make sure your camera was perpendicular to your subject matter.

I could go into allowing for foreshortening and lens distortion calculations but that would take an entire chapter of a book.

There are other options to the survey pole or tape measure. Richard Mays introduced me to graduated adhesive tape on a movie several years ago and it’s a great tool. You can put several pieces within the frame and you’ll quickly see if you have  foreshortening issues. Art Director Jim Wallis has provided a manufacturer and source for ordering some for your kit. Or this one, Or this source for both imperial and metric with story pole writing space.

I know there are a number of ways to scale from photos digitally but if you pla
n to do any 3D modeling with them, Sketchup is a good place to start.

In Sketchup you’ll create a horizontal face and import your photo using file/import. Be sure to import the image as a texture. Stretch the image to fill the face and click. The image will tile itself over the face, so just trim  the excess repeated images.

Create a Group and double-click to open it for editing. This is an especially important step 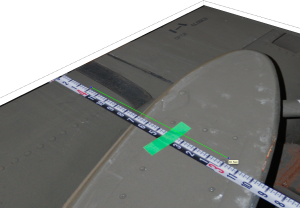 if you already have other object or images in your model file. With the Pencil tool you’ll draw a line along your nomen marking out a specific distance, in this case 12″. the longer the line the more accurate your scaling will be.

With the ruler tool, measure this line from one end to the other. Ignore what it tells you the

length is. Type the length you want it to be which will appear in the Value Control Box in the lower right corner of the window. When you hit return , a box will appear asking you if you want to resize the object. Click ‘Yes’ and the object will shrink/grow to the correct size and your photo image will now be at full size scale.

Now you can trace any area you like and the tape tool will give you a correct length, 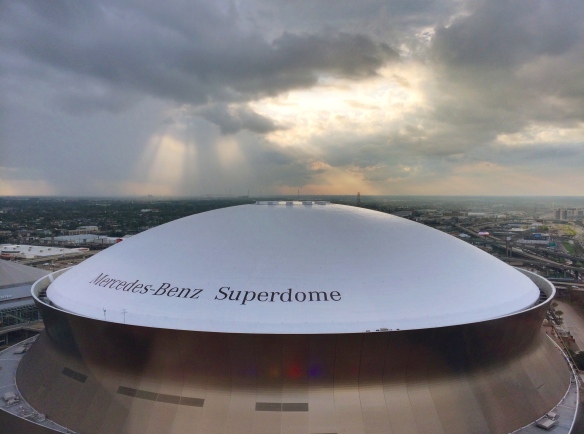 With film production reaching ever larger numbers in Louisiana, adequate stage space has been a constant complaint from film companies looking to shoot in New Orleans. Now that the New Orleans Saints have moved to their new state-of-the-art sports facility in Metarie, the Superdome’s future looked dim.

The city has announced today that the facility will be remodeled as a soundstage and will by 2017 be reopened as the largest film production stage in the world.

Plans call for up to 12 films to be able to be shot simultaneously with new sliding curtain walls to divide the space as required. As a single stage, the dome will be large enough to conduct aerial dogfights inside. The film Apollo 11 is scheduled to be the first production shot here as the new floor will now retract to expose a deep tank for a 800 foot floor-to-perms height which will allow the rocket launch footage to be shot without worrying about bad weather.

Ernest Fuertmann, the projects manager, has announced that filmmakers can certainly take advantage of the bad weather when they need it as the dome’s roof will be configured to open for full sky exposure. The dome will also have the ability to become a giant water tank and will be completely filled with water for the 2018 remake of Red October.

During the news conference, Fuertmann said future plans include numerous subterranean levels which will house blocks of 3-story facades of every major city in Europe.