In 1933, the novelist Christopher Isherwood went to work as a screenwriter on the British film Little Friend. He used his experiences on the film to create the story for the satirical novel Prater Violet. 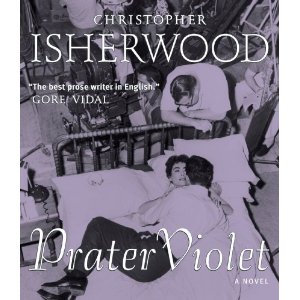 Set in 1939 at the beginning of World War II, the story follows the making of a movie about a park in Vienna. The story describes the dysfunctional,  detached and often dystopic world of the film industry ( in Britain ) as it follows a young screenwriter’s first experience on a film set.  First published in 1945, many aspects of it’s 128 pages are surprisingly contemporary for a book written over 70 years ago. In many ways, it seems, not a lot has changed.

Here are some excerpts:

“It will interest you as a phenomenon.You see, the film industry of today is really the palace of the 16th century. There, one sees what Shakespeare saw. The absolute power of the tyrant, the courtiers, the flatterers, the jesters, the cunningly ambitious intriguers. The are fantastically beautiful women. There are incompetent favorites. There are great men who are suddenly disgraced. There is the most insane extravagance. And unexpected parsimony over a few pence. There is enormous spendour, which is a sham: and also horrible squalour hidden behind the scenery. There are vast schemes abandoned because of some caprice. There are secrets that everybody knows and no one speaks of.”

“Lawrence took great pleasure in pointing out to me the many inefficiencies of the studio. For instance, there was no proper storage room for scenery. Sets had to be broken up as soon as they were used: the waste of materials was appalling.”