Chris Schwarz over at Lost Art Press contacted me back in February to see if I would be interested in doing a hand drawing in a late 19th / early 20th century style for a limited-edition poster to commemorate the 5th anniversary of his excellent book, The Anarchist Tool Chest. I was more than happy to agree to the assignment not only because I consider the book to be a classic, (Schwarz has been a leader in not only creating a hand tool renaissance among woodworkers but creating a whole new philosophy in the way we look at furniture and the process of creating it) but I was also excited to do a drawing entirely in pencil., something I hadn’t done for quite a while.

Except for the occasional quick sketch, it’s rare I don’t do a drawing now on anything except the computer. After digging out my good pencils and tools and some good vellum from storage, (the new stuff is made for plotters not pencils and gives horrible results when you try to erase something), I made a test drafting just to refresh my pencil skills as well as brush up on my hand lettering technique.

As I began to layout the drawing I suddenly began to realize both the differences and advantages of hand drafting over CAD:

1 – There are no in-your-face interruptions such as email, instant messaging, software update notices, news alerts, etc.

The process of creating a working drawing has been hi-jacked by software. There is this fallacy, particularly among those who don’t draw, that the computer is doing the bulk of the work. This is patently false. The computer is just a fancy pencil. It can give the veneer of respectability to a drawing if you don’t know what you are looking at, but the document is worthless if the operator does not understand the basics of creating a working drawing. Also, the process of creating a construction drawing happens to a great extent in your head, not in the computer. A lot of the work on the screen is preceded by a good deal of mental gymnastics, which is why set designers hate to be interrupted. Stop us in process and it will take 10 to 15 minutes to return to the zone where the true work gets done.

When you are drawing with a pencil you are in a completely different mental space that requires you to constantly visualize the object in your mind. This not only makes you work in a much deeper state of concentration but forces you to think many more steps ahead in the process of breaking the object down into what needs to be drawn to communicate its complexities.

2 – You have to think differently about the drawing.

The draftsperson is no longer spending brain power on software or hardware concerns. There is also the endless-zoom mentality where the operator does not have a realistic idea of the scale of the elements. The ability to zoom it 10,000 percent on a document is what leads to prints in which the dimensions and notes are virtually unreadable unless you’re using a magnifying glass. There is also an economy in a hand drawing that is absent from a CAD drawing. You only show what is important for that sheet.

Also a line is what you say it is. With CAD and 3D modeling there is this expectation of perfect scalability throughout the model. That may be a good thing if you are designing a high-rise where there are dozens of other engineers and companies involved but for set design it adds a layer of unnecessary work.

Where you were once chastised for drawing too many brick details on a facade, I’ll regularly get a digital model where every fastener is completely detailed with threads. This is why during the pre computer days it was considered that a good working rate for a draftsperson was a sheet a day, while the rate for most modern computerized Art Departments is calculated at 3 to 7 days per sheet. We used to fear that the computer would make things so much more efficient that less people would be needed. Just the opposite happened. Where a typical feature film used to have 4 to 10 Set Designers, on bigger shows now, there will  be as many as 30. 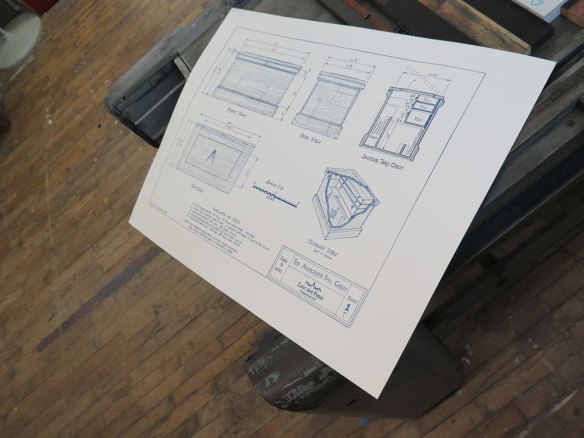 Detail of nice crisp detail of the poster by Steamwhistle Letterpress. Photo by Chris Schwarz

The print is being offset printed by Steamwhistle Letterpress in Newport, KY. Only 1000 of the prints will be made and copies will be available on the Lost Art Press website.

Here is a video Chris made at the shop while the first prints were coming off the Vandercooke press.