There must be something in the water in Boulder. A lot of technology is coming out of that little town including two new devices which could continue to revolutionize the way we work. Location survey work has never been much fun and always comes with unknown challenges that often leave you stymied, ike that billboard you suddenly learn you have to measure, or the block-long row of buildings that you have to survey with two hours of sunlight left in the day.

Using 3D scanners for location surveying and object duplication in the past has been something people have wanted, but the price of most of these devices usually makes their use too cost prohibitive. The iPhone and the many apps that accompanied its popularity have been a real help in many Art Department workflows but their uses are currently limited as far as true 3D capture and augmented reality functions.

Two companies, Ike GPS and Occipital are trying to fill a need for low cost 3D scanners with two inventions which act as add-on devices for digital phones and tablets. By harnessing the power of these devices, their creations enhance products that most people are already using.

Ike is a company which has had previous success with hand-held scanners and was looking to create a device which could be small enough to fit on a smart phone. They’ve come up with a small device called Spike which attaches to an iPhone or other smart phone and uses the devices built-in accelerometer, compass and GPS functions to make it possible to measure the size, height or even the volume of buildings and even create a 3D model to export to a modeling program. 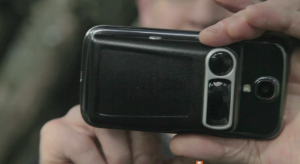 The company is currently running a Kickstarter campaign to raise interest as well as funds to develop the device which they plan on having ready for the market by next May. The device will come in two versions; the Basic version and the Pro version which will generate 3D model files, geolocate buildings and allow for pulling measurements from the digital image. 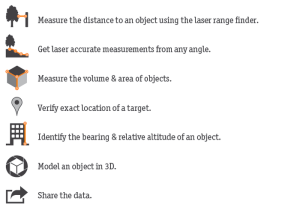 For a donation of $389, you’ll get a prerelease Spike Pro which the company says is around half of the final retail price, meaning the street price of the Pro unit is going to be somewhere in the $800 range. That may seem pricy but the next closest device I know of that can provide similar functions is about 5 times more,  both in size and price.

Occipital has developed a device they are calling the Structure Sensor which attaches to an iPad and can create 3D scans of objects or rooms up to about 550 square feet with a range of 3 1/2 meters. The file can be imported into a CAD package or output for 3D printing.

The Sensor Kickstarter program is fully funded but for a $330 pledge you can still get a Sensor at a significantly reduced price than it will retail for when it becomes available early next year.

Check out the video below:

Here are the links to the Kickstarter pages: