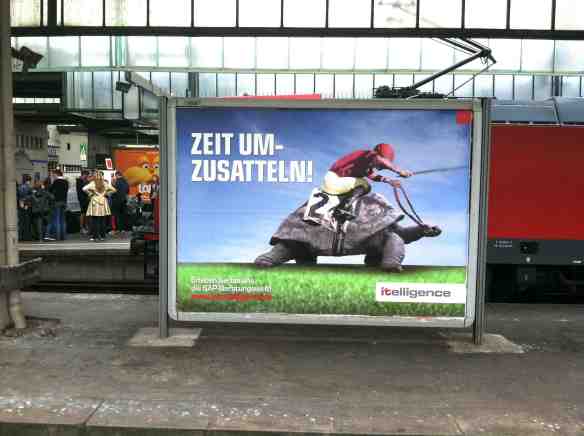 The German expression ‘dorftrottel’ roughly translates as ‘village idiot’ or ‘small-minded villager’, but the expression can have a much more nuanced meaning than it’s English equivalent. The term can also refer to a state of intellectual isolation and mental obduracy rather than just a matter of geography.

It’s easy for those of us here in Los Angeles to drink the media Cool-Aid and believe our own press. For many here, Hollywood is still the big engine pulling the train, still the driving force and font of inspiration for all the other entertainment industries. To a great extent that’s still true, but if you peek into the next room,  you’ll see that other entertainment communities are laying their own track, and we need to know where they’re headed.

I was invited to speak at a 3D and Virtual World conference at the Macromedia Hochschule Für Medien Und Kommunication in Stuttgart which was given a few weeks ago. While the primary focus of the conference was on the world of gaming, the theme also touched on the designing of virtual worlds and all the possiblilities that encompasses. For me, the conference was a glimpse into the other entertainment industries which are helping to expand the meaning and directions in which the 3D digital world is taking us and how it will affect our future as designers of those environments.

The keynote address was by Dr. Michael Bhatty, professor of media and game design at MHMK campus in Munich, who spoke about the new breed of game designers. He believes games are a media and art form all their own and that the potential of them as story-telling devices is yet to be truly tapped. His courses are geared toward creating designers who are ‘directors’ as well as authors of these virtual worlds, and he means ‘worlds’ in the real sense. As the lead designer of the popular game SACRED, Bhatty believes most games fall short of creating a fully fleshed out environment. “You need to know everything [about the games world] from history, religions, deities, cultures, geography etc. The list goes on and on so let’s just say – a good game director is interested in everything when envisioning a new world as her or his playground,” Bhatty said. “I develop backgrounds for research, because most developers make the mistake of not being thorough and rely only on trivia and clichés they know from movies, pulp magazines or other games.”

Coming from a film and art background, Bhatty is very concerned with the cinematic elements of a game, and believes games should have the same ability to move people in the dramaturgical way that films do. Bhatty is convinced that the ‘game’ concept can be extended much farther than the limited definition we have of it, and creating virtual worlds can enhance many other fields such as education.

The Benefits Of A Well-Planned Design Process

Tom Kubischik, game designer and Producer at Morgen Studios in Berlin, spoke about the process of game design and ways to avoid the pitfalls of not following a rigorous design and development process, something a lot of film production companies could benefit from. He also mentioned that many game development companies, rather than wait for interest from the Hollywood community,  have struck out on their own into the world of feature films and television content.

The “Gamification” Of Society

Dr. Steffen Walz of Karlsruhe, Director of the Games and Experimental Entertainment Lab at RMIT University in Melbourne, spoke about Gameful World Design in a humorous lecture on how the world around us is being “gamified”. You can watch his lecture here (in  English) from an earlier conference at LIFT11. He talked about how nearly everything in life is becoming game related or is being influenced by gaming concepts. The end result of this being, I think, that people will expect future communication, learning and entertainment to be more visually based.

While a lot of my lecture involved 3D modeling for feature films, the main topic I covered was virtual reality systems for viewing those models and how I think it will influence both game design and film set design. Virtual reality isn’t really new, it’s been around since the 1800’s when panoramic paintings became popular. Even crude vehicle simulators have been around since the 1920’s.

It’s only with the recent improvements of computer processors that VR systems have become a more viable option for designers. VR systems have been used for over 10 years in other industrys and are now standard for aircraft and automotive manufacturers who are dealing with critical space considerations and find that modeling and designing in full-size 3D cuts large amounts of time. The German company IC.IDO has developed a VR system that is in use by most major car companies and their VDP software allows the system to use a model from nearly any other modeling software program. Watch the videos below to see a simulation of how you soon may be designing.

Is The Home-Holodeck Around The Corner?

I mentioned that as the appetite for digital models grows so does the size of Art Departments at the studios. And as these models become bigger in size and quantity, and if the trend toward more detailed models with fully textured surfaces continues, how long will it be before some producer or someone in studio management realizes they are sitting on thousands of dollars of nearly video game-ready digital assets? Is it so far-fetched to think that someday as kids leave a theater they will be able to purchase an access code that will allow them to “play” the movies in their ‘virtual reality playroom’ when they get home?

I spoke in vague terms about a VR system I have experienced at a company (who’s name I can’t mention) which would make such a thing possible. Once you experience true full-immersion 3D, watching something on a flat screen, no matter how good the 3D is, is just not satisfying. This system could be adapted to various interior spaces and become a sort of present day Holodeck for commercial or home applications.

The upside of all of this is that no matter what the tools or media are, and they will continue to change at a dizzying pace, they only increase the need for designers. Whether the worlds are physical or virtual, they still need to be designed. It’s interesting to note that most of the speakers at the conference were either architects or had studied architecture at university.

The challenge will be in keeping from being seen as an ‘operator’ of these ever more complicated systems, and to continually convince the companys / studios / producers that the truly important factors are the designer and the design, not the high-tech tools themselves.